What Belly Dancers Need to Know About Arabic

Most of my readers know that to be a thoughtful and mindful belly dancer that they must understand the songs to which they’re dancing. And because most classic belly dance music is sung in Arabic, that means working with translated lyrics.

But a translation alone isn’t enough to understand a song. Those of us who didn’t grow up speaking Arabic need to also understand the hows and whys of the language, even if we never become fluent.

If you’re a native English speaker, you might feel a little intimidated by Arabic. The script, sounds, letters, and grammar are all quite different from English. So, it’s natural to feel a little daunted when trying to figure out how Arabic works.

To help you get started, this is the first in a series of blog posts on what belly dancers need to know about the Arabic language, and also what pitfalls and gaffs to avoid.

You might be familiar with the term “Semitic” to describe people of Jewish heritage, but technically, it describes a wide range of peoples and languages in the Eastern Mediterranean, East Africa, West Asia, and even southern Europe.

Semitic languages include Hebrew, Amharic (found in Ethiopia), Aramaic, and Maltese (which is a blend of Arabic and Italian, but retains its Semitic grammar).

These languages share common words and grammatical structure. But what really sets them apart from other languages is their triliteral word roots, which we’ll look at later in the post.

And their sentences tend to follow a word order of verb-subject-object, instead of what we do in English, which is subject-verb-object. Instead of saying “Abby writes a blog post,” a Semitic language is more likely to say, “Writes Abby a blog post.”

Arabic script developed on the Arabian Peninsula, mostly in response to a need to write the teachings of the holy book of Islam, the Qu’ran, in the 7th and 8th centuries BCE.

The writing works a little like cursive, with many letters linked together. These letters sometimes change their shape according to whether they appear at the beginning, middle, or end of a word. Some letters never connect, while others do. Don’t worry about which ones do and don’t unless you’re actively learning how to read Arabic.

Another distinguishing characteristic is that Arabic is read from right-to-left. This can pose some problems when typing in Arabic if your computer isn’t equipped to jump between the two text directions.

Arabic is not the only language that uses this script. Persian (Farsi) and Pashtu also use it, but they are not Semitic languages at all. They are actually Indo-European. They have more in common with English than Arabic or Hebrew.

Ottoman Turkish was also written in Arabic script until the creation of the Republic of Turkey in the early 20th century, when President Mustafa Kemal Atatürk decreed that Turkish would be written in Roman script instead. Turkish is a Turkic language, with connections to Uighur and even some indigenous Siberian languages.

3. It’s Based on a Three Letter Root System

Once you understand that Arabic follows what’s called a triliteral root system, your understanding of basic words and concepts will make a lot more sense. This means that most words are based on three consonants (or vowels that can act like consonants).

Take a word that you’ve probably heard of: Salām, meaning “peace”. It’s of similar origin to the Hebrew “shalom.” The consonant root of this word is S-L-M (س-ل-م), which is the root for words that have to do with peace or being peaceful. From this root we get words like Islām and muslim. The name Salome also comes from this root.

You might also be familiar with the word taqsīm, which means “partition,” and in music, it refers to a solo improvisation by a melodic instrument. The word comes from the root Q-S-M (ق-س-م). From this we also get the name of a common rhythm, maqsūm, (often spelled “maqsoum” or “maksoum”), because of its limping accents.

I’ve heard some people say that Arabic doesn’t have written vowels, but this simply isn’t true. Arabic can be written with all of its vowels, but in general, written Arabic only includes the long vowels. Written texts where exact pronunciation is of the utmost importance, such as in the Qur’ān and in children’s books, will include the short vowels.

Fluent Arabic readers will be able to determine the short vowels from the context of the word, which can be quite difficult for non-native readers. But it gets easier with time and practice.

But what’s the difference between a long and short vowel? It’s basically how long you spend vocalizing that sound before moving on to the next one. Take the word “bid.” The “i” would be considered “short.” But if we write “bide” then then “i” becomes longer.

There are only three long and short vowel sounds in written Arabic: a, i, u, and ā, ī, ū. These vowel sounds do change a bit from dialect to dialect, which I’ll get to later in the post.

The Arabic alphabet has 28 letters, many of which don’t exist in English. These can prove difficult for newcomers, because these letters can be quite difficult to pronounce. They are even more difficult to convey in Roman script because we don’t have letter equivalents.

But there are various ways of writing these letters in Roman script, which we use to write English and many other European languages. Arabic speakers sometimes use specific numbers instead of letters, while academics will use diacritical marks, such as the – over long vowels (such as in taqsīm), and a dot under a letter for the deeper softer letters that are vocalized in the back of the mouth such as ص, ض, and ح (for example: ḥabībī).

One of the most common, and often the most challenging, letters is ع, or ‘ayn. It shows up quite a bit, in the Arabic words for eye (‘ayn or ‘ain), life (‘umri, such as in the song “Enta Omri”, أنت عمري) and even Arab (‘arab, عرب). It is in the middle of sa’idi and the popular song Isma’ouni.

To make things even more difficult, Arabic speakers usually don’t converse in Classical or even what’s known as Modern Standard Arabic (MSA) in their every day lives. They are more likely to speak in their regional dialect, and that can be tricky for those of us trying to learn Arabic in classroom environments which tend to focus mainly on MSA.

Classical Arabic is often considered to be what we find in scriptures, like the Holy Qur’an. It sounds a bit like the King James translation of the Bible. It makes sense, but it would be like using “thee” and “thou” in everyday speech.

Modern Standard Arabic, or MSA, is a bit like BBC English. Most English speakers understand it, but it’s stilted, formal, and Brits don’t talk like that with their friends. It’s called fusḥa (fuss-Ha), and it’s the the variety that I learned first in my academic studies. For regular conversation it’s useful, but when you speak it, you’ll always get asked, “Oh! Where did you study?” It’s that obvious.

Then there are the regional dialects.

There are many regional dialects and they all have their own implicit rules and quirks. The most common ones you’ll here in the music that we use for dancing is Egyptian, or Masri (مصر — “Masr” or “Misr” is the Arabic word for Egypt). In Egyptian Arabic, the q is often dropped, becoming a glottal stop. This is why the word for moon, qamr, becomes ‘amar. Egyptian dialect also changes the soft “J” sound of jeem, or ج, to a hard “G” sound. This is how we get gamil or gameel from jamīl both of which mean “handsome” or “beautiful.”

Egyptian Arabic also can make certain vowels change a bit from their classical or MSA forms. Take the song “Enta Omri.” If we were to pronounce it in its classical way, we’d say “Inta ‘Umri,” but the Egyptian dialect shifts the initial vowels to be more like “Eh” and “Oh.”

7. You Probably Already Know Some Arabic

If you speak English, Spanish, Italian, you probably already know some Arabic words, or at least words that came from Arabic.

Many English words that start with “al” are likely derived from Arabic like: alcohol, alchemy, algorithm, and albatross.

Other words include: artichoke, spinach, cotton, coffee, sequin, and zero.

Stay tuned for future posts about Arabic essentials for belly dancers, including transcribing Arabic into Roman script, and my top pet peeves that dancers do with Arabic.

If you liked this post, consider buying me a coffee.

PrevPreviousApply Your Dance Teacher’s Corrections (Yes, you.)
NextWhat We Get Wrong About “Fusion” Belly DanceNext

A letter to those who say, “Keep politics out of dance.” 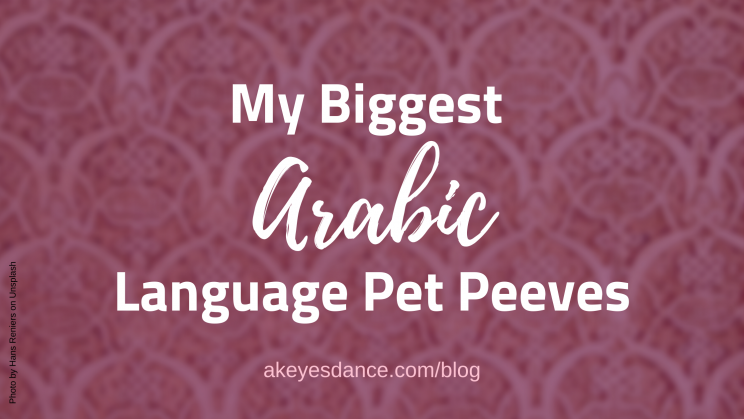 Dancers: Don’t Do These Things with Arabic

A Brief Guide to Arabic Transliteration

What We Get Wrong About “Fusion” Belly Dance